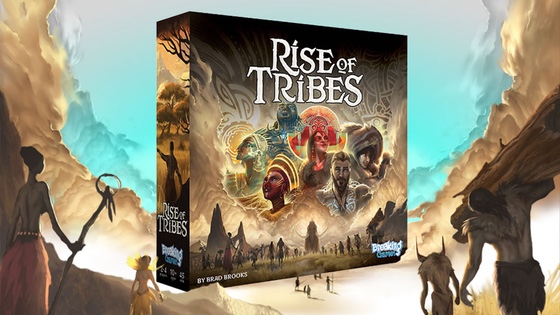 Only a week left to go, and there's a lot to cover in this update. First, welcome to all our new tribe members! Second...

A New Animal Has been Selected!

For those of you just joining us, we're running polls in our Facebook Group to determine a single animal that will be added to one of the basic tiles. This has no mechanic use, but adds to the theme. Also, different scenarios might make use of them.

And the winner is...

Dire Wolves! Apparently, winter is coming to one of the Forest tiles. Wow, what a close race! It came down to the 10 people who shared the post. Remember, if you shared the post, your vote counted twice.

Now if you can't bare the result, keep watching, maybe a future poll will bring back your choice.

For now, we're starting a new poll for a creature to be illustrated on one of the lake tiles! The Rutiodon (Giant Crocodile) is back. A Terror Bird is our second choice. Our third option is a mysterious shadow under the lake that will be difficult to make out, but it will inspire the tribes to create legends around it.

This poll will close Sunday night on midnight PST.

Many of you have asked about the support we'll use to carry out all of these orders. We've decided to work with Backerkit on this project. This means that we'll be able to provide better customer support and options after the campaign.

We'll also be able to offer the game as a preorder there after the campaign, but, of course, not at the large discount our backers got.

Backerkit allows us to finally give you the option to get two games. You'll be able to add on the second game in Backerkit once the campaign is over.

The price is double the tier and shipping will be altered depending on your country. You'll be able to see the cost in Backerkit before making that decision.

Tribes of Many Languages

Thank you to all the loyal backers that have expressed interest in other languages! We want everyone to be able to enjoy Rise of Tribes.

PDF - We are coordinating with a number of translators in various countries to get a digital PDF of the rulebook and references for cards. You will be able to select the option in Backerkit to receive this. Right now, we have confirmed digital translations (rules and card texts) planned in

Printed Copies - We are starting a petition for full print copies in several languages. We need these forms to get out online and find out how many people would purchase the game in that language.

With 500 names on a list or more, we will be able to speak to production about this possibility. Please spread to forums! So far, we have forms started in these 3 languages:

We hope to hear from all of you who want Rise of Tribes in your own language. IF a game is made in another language, we've decided to consider those as first print runs in those languages that will include the promos.

Welcome to all of the new tribe members, and also a big Kickstarter welcome to over 100 people who have made Rise of Tribes their very first Kickstarter project to back! That's overwhelming. We appreciate the leap of faith!

Our latest Stretch Goal to be unlocked is the Jungle tile!

The Jungle tile is for 'scenario play' or optional use. Suggested play is to replace one of the Forest tiles with this one during setup. It will count as a Forest for all card goals and events; however, a tribe must have 3 members to gather wood in this terrain. Be careful, and bring plenty of tribe members with you into the Jungle!

It's the last 20 hours for the Component Collector, and this is the only time you can get the Rise of Tribes tiles!

If you want these exclusive trays, rush on over there and back them.

We broke the Social Stretch Goal for Tar Pits! Now it will be one of the First Print Run promos that all of you get!

The Tar Pit acts as a Lake hex, but of course food can be gathered here only if you are careful. If any player leaves only 1 tribe at this location, they are lost! You'll need a buddy system to survive in this ancient land!

One more Social Stretch Goal to go, the 4 Leader Meeples! Head on over to the Facebook Group to see all of the awesome photos already posted. We need only 5 more Letter Tycoon images spelling out something to do with the Stone Age!

Welcome new tribe members! Thank you for joining our tribe!

Only 7 photos from the final Social Stretch Goal! 4 Leader Meeples for both the standard and deluxe editions will be incredible!

Our next Stretch Goal after the Chieftain Event will involve a few art additions! To start this process, we've put together a poll on our Facebook Group to determine which predator would be added to one of the basic tiles.

This doesn't have a mechanic tied to it, though it will open up some ideas for scenario plays. Plus, I just love that it will add to the dangerous, wild feel of the theme.

If you share the poll in Facebook, we'll count your vote twice! Tell us in the poll (won't count anywhere else) if you'd rather see a Cave Bear roaming the mountains, a Rutiodon hunting in the lake, or Dire Wolves stalking in the forest!

Welcome new tribe members! We've grown over 3000 tribe members to our campaign! Well done all of you who are spreading the word!

It only makes sense with our love of wood components that Breaking Games join with Dog Might Games in creating some fantastic pieces for Rise of Tribes! As an add-on, any backer can get these Exclusive saber tooth tiger dice rolling trays!

You can only get this custom Rise of Tribes piece through this campaign! Everyone will want to play Rise of Tribes when they see this hanging on your game room wall!

Just add the price of the add-on you want to your current tier. When surveys are sent, we'll ask you which ones you purchased.

They only have 5 days left on their campaign, so if you want these exclusive tiles, head over there and select the type of wood and tiles you want. They are not available through our campaign and won't be after their campaign ends!

Yep! You guys did so well with this campaign on the first day, we went ahead and started getting the Mammoths created so that we could show you guys what's coming!

It never gets old seeing games and their pieces being made. If you love how these look and you haven't upgraded to the Deluxe edition, I highly recommend it.

We're only $4K away from reaching the Abandoned Village stretch goal! 37 more backers and we'll get the Tar Pits! We're looking forward to hitting those very soon!